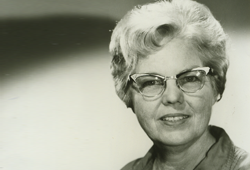 During her long, distinguished career, Smith was a physical therapist, educator and researcher. She was credited with setting the standard of care for poliomyelitis patients whom she treated at the beginning of her career in the 1940s. She also established what grew to be a leading educational program in physical therapy in Texas, the physical therapy and post-polio clinical department of the Texas Institute for Rehabilitation and Research (TIRR) at Baylor College of Medicine in Houston, which was later renamed TIRR Memorial Hermann.

Smith was a trailblazer throughout her career. She was the founder and first director of the School of Physical Therapy at Texas Women's University, where she taught full time from 1965 to 1980. During that time, in 1972, she initiated the university's first master's program in physical therapy. From 1980 until her retirement in 1986, she taught as full professor in the physical therapy program at the University of Texas Medical Branch in Galveston.

Smith is credited with setting the standard of care for poliomyelitis patients in the 1940s. Some 40 to 50 years later, she was treating polio patients again, for symptoms of weakness, fatigue and pain. By 1990, she was at the forefront in researching the underlying mechanism for "post-polio syndrome," the condition afflicting patients who had polio to 20 to 40 years earlier.

"We are very grateful to Laura Smith for her tremendous generosity and commitment to funding physical therapist scholarships through the Foundation for Physical Therapy," said Foundation President Richard K Shields, PT, PhD, FAPTA. "With exceptional gifts like Laura Smith's, the physical therapy profession can continue to make tremendous advances in new and refined patient care."

Smith was born in 1923. A life-long member of APTA, Smith was named a Catherine Worthingham Fellow in 1990. She died in 2006 after a long illness with Parkinson's disease.