Pursuing the Value of Physical Therapy 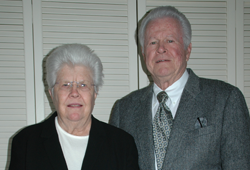 After 48 years in physical therapy, primarily as a successful private practioner, Jim McKillip knows a thing or two about how to make operations run cost effectively while achieving great results and patient satisfaction. By the time he retired in 1991, Therapeutic Associates, which he formed with Robert Dicus in 1957, had grown from several facilities in Southern California to a 450-plus person operation with offices in 4 western states.

Along the way, McKillip worked through the American Physical Therapy Association to establish physical therapy as a licensed profession in California and one that could be conducted in an independent practice venue. In the 1950's, with fellow PTs in APTA's Southern California Chapter, McKillip also helped developed a fee schedule system for physical therapy services based on the objective measurements of time, modalities and procedures. It provided for cost predictability and helped identify and manage PT costs for the profession and the third-party payers.

"I had the goal of proving that physical therapy was a very worthwhile profession - that you could treat patients with scientifically based methods and you could save them and their agents money by treating patients effectively and efficiently.

"Physical therapy is widely used, but not always widely appreciated, for its contribution in reducing the patient care costs as it developed or restored function by returning the patient to independence or returning him or her to work" he continued.

The profession is challenged to show, and it has been remiss, in identifying the economic value of its services. He cites "returning patients to independence, helping putting people back to work more quickly and on eliminating or reducing the cost of supportive help" to name just a few.

Today as a retired PT and business owner, and past president of the Foundation for Physical Therapy, McKillip continues to advocate for advances in physical therapy and rehabilitation research and interventions. He urges that research should also include identification of the potential financial savings that is so important to employers and other third-party payers. To encourage the twofold quest, McKillip recently announced that his own financial plan includes a generous bequest to the Foundation for Physical Therapy.

Through his gift, McKillip leaves a legacy for the future of physical therapy that will expand the range of treatments to benefit patients and therapists, and hopefully make their financial benefits better understood.