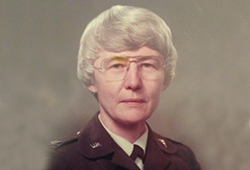 Longtime supporter and active member of the physical therapist community, "Betty" Lambertson, left a generous bequest to the Foundation for Physical Therapy as part of her final wishes.

Betty was in college when she first learned about physical therapy. Committed to becoming a high school chemistry teacher, Betty quickly realized that physical therapy was indeed the perfect fit for her.

Betty joined the United States Army in order to participate in an offered course in physical therapy. It wasn't long until the US Army became her permanent "home".

Betty also spent nearly a decade teaching and fulfilled the role as Director of the US Army/Baylor University Program in Physical Therapy.

Betty served her country for almost 30 years as a physical therapist clinician, educator, and administrator and was awarded the Distinguished Service Medal " for exceptionally commendable service in a duty of great responsibility" before she retired as Colonel in February 1978. Soon after, Betty helped establish two organizations that were important to her: Alumni Association - US Army Entry Level Programs for the Physical Therapist and Retired Army Medical Specialist Corps Association (RAMSCA).

COL Lambertson was an active member of the American Physical Therapy Association (APTA) where she served many different capacities including Judicial Committee member and as a delegate to the House of Delegates. In 1987, Betty was the recipient of the APTA Lucy Blair Service Award for her exceptional work to the association.

Betty's gift to the Foundation comes as no surprise as she was considered a caring soul and to have possessed a distinctive love for serving others. Her thoughtful nature and warm heart will not be forgotten. COL Lambertson will be deeply missed by members of her family, her many friends, and the physical therapist community.