Continuing a Family Legacy of Giving Back 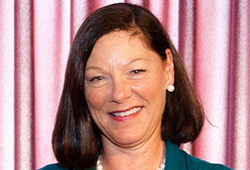 Janet Peterson, PT, DPT, started out as a Stanford University undergraduate with dreams of becoming a high school history teacher, but after taking a human biology class as a freshman with the legendary primatologist Jane Goodall, she was inspired to pursue a career in the sciences, particularly in the health field. When she was accepted into Stanford's physical therapy program, her lifelong fate had been decided.

In the mid-1970s, students in Stanford's physical therapy program were taught to be "change agents," meaning that they were taught to treat patients based on their own interpretations of the specific problems and issues the patients were experiencing, and to use the skills they learned to apply personalized interventions. Peterson has continued to use this way of thinking for how she approaches everything in life.

After graduation, she worked in a rehabilitation hospital in the San Francisco Bay area for a few years, and then moved back to her hometown of Seattle, working in a hospital setting for the next 20 years. While there, she received additional training in ergonomics, subsequently leading to the next phase of her career. In 1998, Peterson started her own business, J.P. Ergonomics Consulting, which provides ergonomic consulting services for individuals and groups. She also teaches ergonomics classes to both physical therapists and occupational therapists.

Additionally, Peterson has been involved in the Washington Chapter of the American Physical Therapy Association (APTA) and House of Delegates since 1989. She served as President of the Washington Chapter from 1999-2003, and then served on APTA's Board of Directors from 2003-2008. Peterson feels that the opportunity to help shape the future of the profession has been a privilege and an honor.

Through her connections with APTA, Peterson became familiar with the Foundation for Physical Therapy and its importance to physical therapy research. She recalls those early morning weekend calls when Dr. Marilyn Moffat called to ask for her support of the annual Split Raffle fundraising effort. As a way for Peterson to try and increase more involvement by her chapter members and generate awareness in supporting physical therapy research, she reached out to them asking that they contribute whatever they could (eg, $5, $10), so the entire chapter could support the Foundation's efforts.

While serving on APTA's board, Peterson decided to pursue a doctor of physical therapy (DPT) degree. Her studies reinforced the critical function of the Foundation and the importance for research in providing evidence for physical therapists in supporting the work that they do. During her tDPT program at Temple University, she was able to gather supporting evidence related to her client base from her own ergonomic business for many of her class projects, which has since strengthened her own practice.

Although she currently doesn't do clinical research herself, Peterson wants to support those that do. She chose to make a planned gift to the Foundation by learning from her parents; both were charitable givers and made provisions in their wills for legacy gifts to causes that were meaningful to them during their lifetime. She hopes that her own children will follow in her footsteps to do the same for causes that are important to them to continue the family legacy of giving back.

For Peterson, she understands the importance of physical therapy research to the continued success of the profession and wants to see it continue to grow and evolve. She also sees a value in giving back to the community as a whole. She views physical therapy research as being critical to the health of the profession and status in the health care environment. "If we aren't able to document efficacy, then we will be left behind in the health care world. The decrease in government funding makes it even more vital for the Foundation to be there to help provide seed money for new researchers. The Foundation continues to be a great training ground for new researchers to learn how to receive funding from other sources," Peterson says.